On the road, there's adventure waiting every day.

Exploring London and Eating up the Skyline 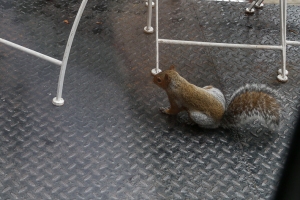 The next morning we all awoke, which didn’t feel like a given in our Haunted House. The shower was very pretty and had an old-school design where you could switch the water flow from the tap to the shower head.  We tried about 5 types of voodoo and eventually all managed to get the shower to work.  Amy had also been coming down with a cold (we hope it was a cold, and not an attack by an evil spirit), but she was soldering on and we collectively dragged ourselves to a cafe near the train station to get some breakfast.  Turns out that breakfast this morning came with a cute little squirrel putting on a show!

We decided to spend the morning apart, given that Amy and Drew had seen many of the sights before, and that I really wanted to tour the tower of London.  So while they checked out a few museums, we headed to the tower of London.  I nearly died of a heart attack at the entry fee (£26.80!), but it was totally worth it.  Through simple stupid luck we arrived just in time to take a Beefeater tour, which was REALLY well done.

After our tour we did tour the Crown Jewels, but you’re not allowed to take any photos in the exhibit at all….  So all we have there is memories of regalia from Monarchs long past and present.  Pretty pretty jewely stuff.  Most interesting to me was that you’re literally on a conveyer belt as you get transported past the actual Crown Jewels.

Seeing so many crowns and sceptres did make us hungry so we grabbed some lunch before continuing our tour, finding some art around the place, which included Monkeys and elephants made out of chicken wire and statues which just invited me to play with them….

As we were strolling around we even got to see a changing of the guards. These dudes take their walking seriously! Below is them going home, probably to grab a beer.

I really have to say that the entry price was totally worth it.  We ended up spending most the day there, returning to the Airbnb just in time to get ready for a fancy dinner we had booked at Fenchurch Skygarden Restaurant.  The food was amazing, and the view was pretty good too.  It was a strange design, the restaurant is pretty much a glass cube within the glass upper level of the building.  This meant that the view was great, but you actually got a more spectacular view from the viewing platform just below.  None the less, it was an incredible night!

Boys with a view in the background!

While the service wasn’t exactly 5 star, Drew totally made that worth it by making our waitress to a friend and scoring a button of the parent organisation!

Feeling totally happy and full of delicious food, we wandered the town a bit, to see the London Eye and walk past some random Cathedral….  Where we wondered just why the dude was escaping out of the decorative corner piece.

A short train ride later, we were all exhausted enough to drop into bed and sleep, almost forgetting about our surroundings.

Theme by Anders Noren — Up ↑